The following is actually the story of a beautiful Hawaiian girl, one Makahele Koa Alaia. So, while I just sit back and admire her beauty, I’m gonna let her tell her own story:

Aloha! I am Makahele Koa Alaia. In a former life, I was a majestic Koa tree, born and raised in the I’o Valley on the island of Maui. But now,  I have been reincarnated as an alaia, for it was my destiny.

For those unfamiliar with my species, I am Arcacia Koa. Koa trees were once the kings of the Hawaiian forest, growing to heights greater than 100 feet with a base of more than 10 feet, and protected by a fearless god. The name Koa means “bold, brave, fearless warrior.” Koa symbolizes health, wealth and general well-being. One Hawaiian blessing goes: “E ola koa!” or “Let him live with the health, wealth and well-being of a Koa tree.”

Koa has always been prized for its reddish-brown, fine-textured wood. Carpenters and craftsmen alike have always been attracted to its low shrinkage, workability, and unique ability to cure from green wood to finished product without cracking. It provided the early Hawaiians with a stable wood from which to build houses, canoes, and most importantly for the sake of you readers, surfboards.

You see, in Ancient Hawaii, surfing–or he’e nalu–was of great spiritual magnitude.  Everything from praying for waves to the art of making boards was ritualistic. The board you rode and even the wood in which it was constructed determined your place in the society’s pecking order.

Under the kapu system of laws, the ali’i, or ruling class, was above all others. The commoners surfed on paipos or alaias made of ula or koa wood, and the ruling class rode another type of board made of the more buoyant wili wili wood, called an olo.

I, personally, am proud being the wood of the commoner. E ola koa!

I began my life on this earth in the I’o Valley on the island of Maui, a site of a historic significance.  In 1790 the Battle of Kepaniwai took place there, in which Kamehameha the Great, a surfer, defeated Kalanikupule and the Maui army during his campaign to unify the islands. The battle was said to be so bloody that dead bodies blocked the I’o Stream, and the battle site was named Kepaniwai, meaning “the damming of the waters.”

While I was born in the I’o Valley, I’m not actually quite sure of my birth date. All I know is that Koa trees may be the most ancient tree species in the Hawaiian archipelago. Scientists believe that as a species koa is millions of years old.

I do know that in February of 1911 my life as a tree came to an end. That month I was harvested by a ship’s captain (and surfer), and shipped all the way to North Florida where I was to become part of a house to be built on the St. John’s River.

That house, however, was never built, so I’ve spent the past 99 years as a plank, 6 feet 11 inches tall, 16 inches wide and one inch thick, sitting in a barn with hundreds of other Koa planks.

About three years ago, a surfboard shaper named Greg Hall, was contacted by a group of lawyers and informed that he was the recipient of myself and all of my other Koa plank friends, willed to him by the dying ship’s captain.

Greg, who had taught board shaping and water safety to kids at the Haleiwa Surf Center back in the 70s had taught the captain’s grandchildren the art of surfboard making.  The captain was impressed not only with Greg’s prowess, but more importantly, his Aloha Spirit, and he left Greg all of the precious Koa under four stipulations:

One, he was to never divulge the name of the family or the location of the wood. Two, he was not to pay for any of it. Three, he could use all he wanted.  And four, he could use it only to build surfboards.

When Marion Stratford, a surf writer from Jacksonville Beach, Florida, heard this story he was, to say the least, blown away.  He told the story here on The Surfing Handbook, and in the following days got to know Greg better.  As the stories unfolded there was one thing for certain: He had to have one of the magnificent alaias that Greg was building.

Marion promptly placed his order for an original Koa Alaia.

So, after sitting in the barn for 99 years, Greg came and rescued me on Monday, August 23, 2010.  From that day forward I was to begin a new life as an Alaia.  I bid my other Koa friends “Aloha” and told them, “I’ll see you in the water.”

My first stop was Greg’s house in Altamont Springs, Florida, where I would literally take shape. Greg called Marion and gave him my specifics:

So with my new life came a new name: Makahele.  Greg decided to shape me from a template of an alaia owned and ridden by Princess Ka’iulani from 1889. Princess Ka’iulani’s Alaia is one of, if not THE oldest surfboard still in existence. It has been housed at the Bishop Museum in Honolulu since 1922; part of the estate donated by Ka`iulani’s father Archibald Cleghorn.

Born Victoria Ka’iulani Kalaninuiahilapalapa Kawekiu i Lunalilo Cleghorn in 1875, Ka’iulani was heir to the throne of the Kingdom of Hawai’i and held the title of crown princess. She became known throughout the world for her intelligence, beauty and determination. After the overthrow of the Hawaiian monarchy in 1893 she spearheaded a campaign to restore the Kingdom, but her negotiations could not prevent the eventual annexation. And, oh yeah, she was a surfer.

She “was an expert surfrider,” according to early Twentieth Century surfrider Knute Cottrell. “She apparently was the last of the old school at Waikiki.”

Needless to say, I am honored to carry on the tradition of such a great princess.

So, on Monday, September 6, 2010, I was shaped in the form of the Princess’ alaia. A tremendously heartfelt Greg wrote:

“Marion Stratford’s alaia is getting shaped by history! This template is from Princess Ka’iulani’s alaia from 1889, Hawaii. It will be about 7’2″ or so, depending on the tailblocks added. Makahele is destined to go surfing in Florida first, where she has already lived hidden within an old plank in a barn for 100 years! You cannot appreciate the wonderful feeling I have making these recreations of Princess Ka’iulani’s surfboards, unless, of course, you know the tragic history that is her story and America’s greatest disgraceful act. In a nutshell, she was a very beautiful and brave little surfer girl who surpassed all expectations in a hard Victorian world. There is little written how she had to sneak to the beach, away from the missionaries, to ride inside the very hollow tubes of Queen’s surf and even the huge “Bluebirds”, way outside with the big boys; this even before Duke Kahanamoku was even born! Just think of that! Think of the great joy she knew! You can see it in the shape of her board, can’t you!”

That’s what I really like about Greg: He’s not only a gifted shaper, but he carries within himself the Aloha Spirit, acquired during his 26 year tenure shaping boards and riding big waves on the North Shore. He always handles me with care and uses only hand tools, just like the Ancient Hawaiians 1000 years ago. He even took the time to have me blessed, as is the Hawaiian tradition.

On Wednesday, September 8, 2010, Greg sent Marion a few pictures, just to let him know how I was coming along. He wrote:

“Makahele Alaia has been roughed out, endured the blessings by the Duke and the Tiki, and has been anointed with the first of many coats of oil.”

Marion could only respond:

“When I make these and see the grain that has been hidden by dirt and sawdust, you can’t imagine how hard it is to accept the fact that this can’t be mine and I have to pass it on. Oh, it’s a joy for sure, but like any parent, always a tough thing!”

Quite flattering, I must say. But I must admit… I do look pretty good, don’t I?

So, having been blessed by the Duke and the Tiki, I looked forward to being branded with Greg’s honu petroglyph, the logo for his Petroglyph Surfboards.

On Thursday, September 16, 2010, Greg’s honu petroglyph was burned in (painless), and the first coat of oil was applied. Greg wrote:

“I am making “MAKAHELE,” Marion Stratford’s stunning Koa wood Alaia. Here is a teaser picture of the baby Alaia, with it’s “Honu” seaturtle petroglyph leaving a trail under the very first coat of oil on the Deck. The board is 6′ 11″ long, made from Koa wood from the mountains that form I’o valley, Maui.”

The following two weeks were spent being caressed with daily coats of tung oil. I could see the light at the end of the tunnel, or should I say, “tube.”

On September 26, 1010, Greg sent Marion the message he had been anxiously waiting for. Greg wrote:

“Aloha kau ko! Makahele ready fo’ pick up! As dey say around the Paniole ranchland when da kaukau stay pau, ‘Come and git’ da grinds!’ (translated pidgin English: ‘Why, Hello, my very good man! Your Koa wood Alaia surfboard that we have named Makahele is finished, and ready to be appropriated into your possession!’ As they say on the Hawaiian cowboy ranches when the dinner has been prepared and ready to eat, ‘Please come and partake in Dinner!’”

Marion arranged to drive down to Altamont Springs, but then Greg had another idea. It turns out that Greg was attending the 10th Annual Beach Bash at Bethune Beach on October 3. It was decided that Marion would drive down to the bash and pick me up that Sunday.

And so it was. Greg and I drove to Bethune Beach and met Marion, who I must say, sure does grin a lot! I don’t know if it was me, or the alcohol, or what, but he wore a smile that never left his face the entire day. In fact, he’s still smiling.

Today, I am standing in Marion’s living room. The house is sweet with the delightful scent of tung oil, and I’m fond of the new crib. I miss Greg, but at least he sold me to a surfer who is aware of and appreciates my humble beginnings and the lives I have led thus far. I’m certain we will have a wonderful life together.

Marion has lots of friends who all tend to admire me, offering “oohs” and “aahs” as they fondle me from nose to tail. They speak of my hard rails and beautiful grain, and quite honestly, it can get to one’s head a bit (but just a little)!

However, that being said, I’ve got to tell you, after one week, I’m starting to get a little agitated. After spending the past 99 years in an old, moldy barn, I’m not exactly diggin’ leaning against Marion’s living room wall.

I’m a beautiful Koa Alaia. I bear the name Makahele. I was born in the I’o Valley, site of Battle of Kepaniwai and inspired by the great Princess Ka’iulani!

Darn it! I am destined to surf… and I wanna get wet! 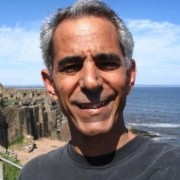 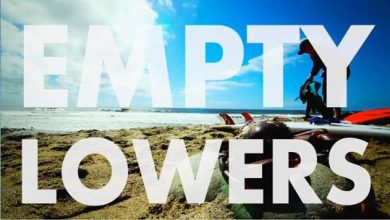 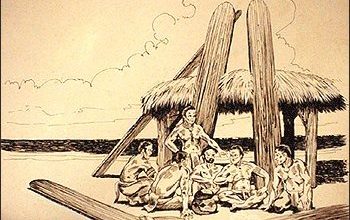 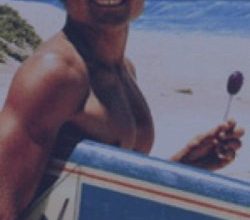