Surfboard fin history has taken a long, meandering path filled with experimentation and mutation. The road to the present day selection of fins was truly a group effort amongst the most brilliant surfing minds of the past century.

The first Hawaiian surfers with their gigantic olo boards did not have fins. They weren’t really maneuvering their boards too much—most wave riding was done moving straight into shore. 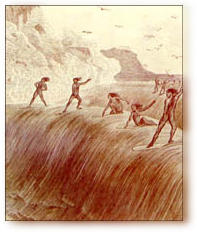 Instead of trying to carve turns, the ancient Hawaiians found a pleasant sport in simply trying to keep the board pointed straight while being pushed by the wave.

Before fins, the only method to control where the board was going was to stick your feet and toes into the water.

In 1934, Tom Blake—-legendary surfer and inventor of the hollow surfboard and waterproof camera housing, among other things—-decided to use his ingenuity to solve the problem of board control. Legend has it that he asked a speedboat skipper about the skeg on his boat, and was told it was to help stabilize the boat during hard turns. One day Blake noticed an abandoned boat on the beach. He took the keel off, modified it, and attached it to his surfboard. At first he didn’t like the sensation, but once he caught his first wave, he was hooked. 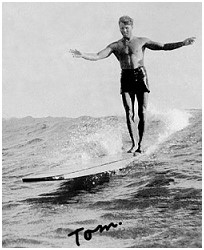 “When I first went to the Islands, they used wide-tailed boards and they used to spinout on a steep, critical slide,” he said. “I figured it would be easy to correct that problem, just add something – a keel. Finally, I got around to it. You didn’t hurry things up over there. You were having too much fun surfing every day. Finally, I put a fin on the board and it worked fine. It was a shallow fin, about 4″ deep and a foot long. It took ten years for that thing to catch on and then the boards kept getting lighter and smaller and [then] the fin became more effective for steering.” *

The evolution of the fin from Tom Blake’s first prototype was a slow process, sometimes taking two steps forward and one step back. The keel fin that Blake first created was modified by Bob Simmons in the mid 40’s into roughly the same shape that is used today. Simmons was the first pioneer of the multiple fin setup when he invented the twin fin design. 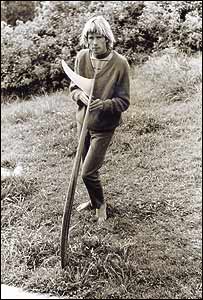 George Greenough is credited with creating narrower fins with more flex, modeling them on the tail fin of a blue tuna. He first used this high aspect ratio design on his kneeboards, but the new fin style was so successful that it eventually made its way to standup boards when Bob McTavish implemented the design into his lighter, shorter boards.

The original 40’s keel fin didn’t come into its own until the 70’s, when Steve Lis used it on a twin fin setup on his revolutionary “fish” design. Lis’ boards were originally shaped as kneeboards with two extended keels that allowed him to rest his flippers and reduce drag, while still retaining the performance aspects of a pintail. The fish shape soon exploded in popularity.

Surfers were still riding single fins into the early 1970’s, but that would soon change. Austrailan Mark Richards took the new Californian fish design and modified the twin fin design slightly. He then rode it in competitions, stunning the judges and crowds with some of the sharpest turns ever seen in regulation contests. Richards won four consecutive world titles with his twin setup from ’79-‘82, forever changing the direction of modern surfing.

In 1980, surfboard fins would undergo a monumental innovation. In the late 70’s, Young Australian Simon Anderson was becoming known for surfing the giant waves on the North Shore of Oahu. He was frustrated, however, by his inability to adequately control the Richards style twin fin in larger surf. One day he noticed someone who had a twin fin board with a smaller, half moon fin in the middle. He modified the idea for himself, creating a new design with three fins of equal size. Dubbing it the “thruster,” the design has remained unchanged to this day. The thruster design enabled more radical, spray-throwing maneuvers than ever before, and surfing has grown monumentally since its inception.

The Bonzer was the original tri fin design pioneered by the Campbell brothers in 1970 after encountering the same problem Simon Anderson had—the shorter boards of the era had no control in powerful surf with the then-current fin designs. Why aren’t they credited with the invention of the modern tri fin setup? Unfortunately, the Campbell brothers were not pro surfers. They were just “two kids from Oxnard totally off the radar screen,”* and their innovative designs were somewhat ignored by the mainstream.

After the thruster was popularized by Simon Anderson, the Campbell brothers went back to the drawing board and created a new 5 fin design in 1982. They kept their new invention under wraps for a long time, waiting for the domination of the thruster to die down.

In the 90’s, the Bonzer 5-fin began to surface here and there in the mainstream. With support from several pro surfers like Donovan Frankenreiter, Joel Tudor, Rob Machado and Taylor Knox, the Bonzer was finally getting its due respect. In 1999, however, Rusty began to promote it’s so-called “new” five fin design and it seemed that the Campbell brothers efforts would once again be overshadowed. The good news is, however, that the name Bonzer is now widely associated with the five fin design. A fun looking Bonzer was featured in the popular Malloy brothers surf film “Shelter.” (author’s note: Shelter was the first surf movie I ever saw, and to this day the image of Donavan Frankenreiter flying down the line on the Bonzer remains etched into my memory. It just looked so darn fun!)

Bonzers also introduced the concept of the concave hull, a feature seen in most present day thrusters.

The story of the Campbell brother’s often unrecognized efforts is a sad testament to how the surf industry is now driven primarily by media and the almighty dollar.

Currently (Fall 2006) the California Surfing Museum is showing an extensive exhibit documenting the evolution of the surfboard fin.
http://www.surfingmuseum.org/exhibits_surfin.html

Quote from Tom Blake, taken from this great website:
http://www.legendarysurfers.com/surf/legends/ls07_blake.shtml

Quote from the Campbell Brothers taken from their informative website http://www.bonzer5.com

Four fins were originated in San Clemente CA and fifty of them were made before Feb 1981.
Feb 1981 simon anderson rode his Tri fin.
Four fins came from fixing a badly designed twin fin fish that slid out on hard turns. Adding two fins worked. Never slid out again
Why not deliberately make wider tails with four fins?
That’s what happened. Hundreds of people in san clemente know this. Many in Oceanside knew that fact as well.
The man that made them makes something more advanced than the “exactly” precise four fin design made back then. Four equal sized fins and extreme nose to tail rocker and thickness Flow that combined the measurements that made every one of those four fins
Turn very sharp on the edge on all turns.
Never dig in a rail in the tube or on turns
Never slide out of control or drift unpredictably
Did accelerate with every single turn
I rode one and I had to wait years until I found the same shaper again in pismo beach in the late 80s.
He made boards with military fighter jet wings on each tail. One of his riders won the amature world champioship boys div. In 1989 on one of those. Four fins and two huge wings

the new morf of the fin systems for surfing is the advanced twin design
http://www.stonefishskegs.com.
the design features reduced drag with no trailer fin, they are deep with a base designed for sensitive guidance with control at speed. the finlet shape offers that perfect feedback from the deck when in a power maneuver , puts the twin fin on a new level. placement on the board makes it important to offer glass ons only. the finlets should be outside the rail line, seen from the deck view. this is what will be ridden in the line up in the near future. the hope of this design of the fin and the proper installation will mean an increase in custom board sales using this system. i invite you to view them, USpatent D593,176 Randy