Applying surf wax can be somewhat mystifying to the inexperienced. Once you do it a few times, however, you won’t even have to think about it.

Surf wax is for the deck of the board, and keeps you from slipping off. It’s hilarious to watch surfing newbies take their shining new board straight from the shop to the beach and try to surf with no wax.  I’ve also heard stories of people waxing the underside of their board. I don’t know how people get this idea. Maybe they think the wax is supposed to help the board glide on the water. 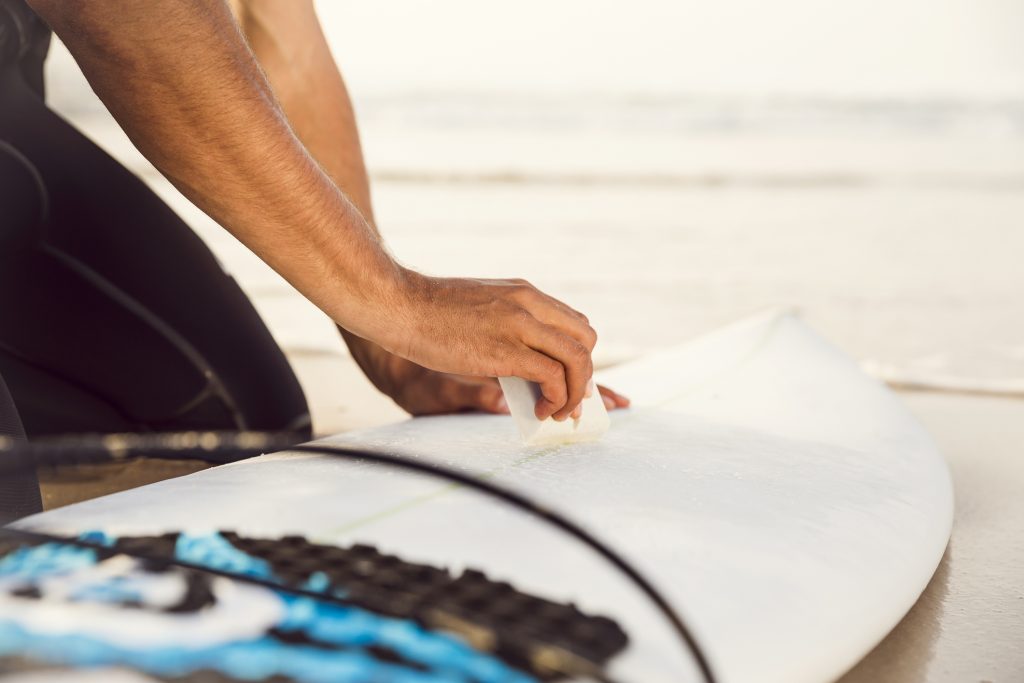 Get the proper wax

There are several surf wax brands, including Mr. Zog’s Sex Wax, Mrs. Palmers, Sticky Bumps, Bubblegum, and several others. I like Sticky Bumps wax the best, but most waxes work just fine. In my experience Sticky Bumps is easier to apply.

It’s important to get the right wax for the temperature of the water you’re going to be surfing in. If you get a cold water wax but you’re surfing in Hawaii, the wax is going to melt right off. It seems like a strange idea, but the wax WILL disintegrate and rub off faster than you can believe. Harder wax has a higher melting temperature, and softer/tackier wax has a lower melting temperature. Wax companies make several different grades of wax:

These degree ratings are for Sticky Bumps brand surf wax. Each company might have slightly different temperature ratings, so you’ll have to check it out for yourself.

Table could not be displayed.

There aren’t really any instructions on the bars of surf wax, so beginners are often left wondering just how the heck they’re going to put the darn stuff on. The result that you want when you wax your board are small bumps. The bumps help improve the grip of the wax. You don’t want a smooth sheet of wax since that can be almost as slippery as no wax.

Tip: Don’t wax your board in the sun, especially in the summer. It will probably start to melt. You want your wax and board to be nice and cool for the best application.  You can wax in the sun if it’s been in the shade a while, but if you let the wax warm up on a hot summer day it’s going to be tough going and probably just smear or flake off.

Rest your board on something soft, and either take the fins out or make sure they are not going to be stressed by the pressure of waxing.

Get a bar of basecoat (basecoat isn’t necessary, but it helps a ton) and put down a very thin and even layer. Don’t press too hard for this step. Then start rubbing the wax on the board lengthwise, parallel to the stringer, and then crosswise, from rail to rail. This crosshatching will help the wax start to form small bumps. Sticky bumps puts a little slogan on their wax bars: “Nose to tail and rail to rail.” You don’t have to press too hard, just keep a firm pressure. Too much pressure will wreck your newly forming beads.

Sometimes the wax will get hot from all the friction and will start to get too tacky. If this happens, the wax might look like its shredding. Shredding wax doesn’t make for a good wax job. Take a break or switch to another bar.

Once you’ve got a good layer of topcoat on there, grab the regular wax and start rubbing it on. Once you’ve got some well established beads you can start to rub diagonally or in circles. It’s really up to you. Wax isn’t permanent, so you can experiment. If the beads are starting to look elongated, switch to another direction.

One wax application tip I found is to “draw” on the basecoat wax in a diagonal crosshatch pattern. Basically you take the corner or edge of the wax and draw parallel lines about 2 inches apart from the upper right rail to the lower left rail. You then draw another set of lines on top of that from the upper left rail to the lower right rail. It should look kind of like a fence. Make sure the lines are nice and heavy. Once you’ve got the lines established you can go ahead and start to form the bumps.

Where to apply your surf wax

You might be wondering WHERE you should put the wax. Basically you want plenty of wax on the board, so don’t skimp. Longboards are customarily waxed all over the deck, from the tail to the nose. This is to allow you to walk the deck and hang 10.

However, you probably won’t be doing moves like that for a while, so you don’t need to wax the entire deck. If you have a shortboard or funboard you also don’t need to wax all the way to the nose. You’ll want to wax approximately the back ¾ of the board. Approximate where you’ll put your feet (rear foot over the fins, and front foot over the middle in a comfortable athletic stance) and give yourself at least 10-12 inches more wax from your front foot to the nose of the board. You’ll want to be able to move your feet around.

Since you’re a beginner, you might not always pop up in the precise spot you want, so extra coverage in the wax area will be beneficial.

You will also want to wax very close to the rails in the spots where you’re going to be grabbing your board for your popup, duckdives, and turtle rolls. The extra wax will help you grip your board better.

Removing the wax is easier than you might think. Surf wax is really messy, so start by getting some old newspaper or plastic bags to cover the floor. You can do this outside or inside, but make sure you’re not doing it on Aunt Josephine’s antique Ming dynasty rug. Your family might also get mad if there’s lots of surf wax on the lawn or patio.

Put your board on something firm but soft. Take out the fins if possible, or put them on a folded blanket. (If your fins are glassed on or you don’t want to take them out, be very careful that you don’t snap them when you’re waxing the board)

Depending on how hot your area is and how strong the sun, leave the board in the sun for 5-15 minutes, or if it’s cold and cloudy, give it a quick once over with a hairdryer. (Don’t burn your poor board) Then take a firm plastic straightedge (no metal) like an old credit card and scrape the wax off your board. Some wax combs come with straightedges for wax removal. My Zog’s Sex Wax “Sex Comb” even has an inwardly curved edge for the rails. (The prominent “Sex Comb” label also causes lots of awkward questions from my friends who find it in my car!)

No wax comb?  Use an old credit card or similar.

As you can see, the wax comes off in thin scrapings. Now you can collect the wax in a ball and throw it at your friends. If you don’t have anyone nearby, throw it in the garbage before it gets all over everything. Wash your hands with hot water to get all the residue off.

Surf wax remover will get ALL your remaining wax residue off, but it’s very smelly and isn’t necessary if you’re going to put wax right back on.

HOWEVER, in recent years an invention has come around called The Pickle.  I freakin love this thing.  It is like a sock with fiberglass foam dust inside that literally erases extra wax right off your board.  You won’t believe how good it works until you try it.  This lets me polish all the wax off my boards in record time, making them look super new.  Just make sure to scrape the majority of wax off your board first, as much as you can, then rub it with the Pickle for a board that looks like it came right off the rack.  MUCH better than the liquid wax remover.