donkey n. a kook, someone who blatantly disregards surfing etiquette

Ok, I hate to be a negative nellie and all that, but this post has been inspired by the throngs of beginners flocking to the waves at one of my usual spots back home here in New York.  (oh, and uh, there’s no surf in New York, but that’s a subject for another post at another time)  I have no problem with beginners – everyone has to learn sometime.  I remember being a beginner flailing around in the whitewash just a few short years ago.  However, there were a few key things that I tried quite hard not to do when I was just starting out.  It’s about respect, safety, and keeping order in a changing and often dangerous environment.

With the influx of beginners these past few years has also come a sense of entitlement and general rudeness out there in the water.  Case in point; at a local benefit/memorial surf contest a few weeks ago a stand up paddler decided to paddle right into the contest zone.  Upon being told multiple times to please vacate the contest area and move down the beach, he promptly replied with a nasty, “Grow up.”  Really?  Really? I know this is New York, but gimme a break.

Think of this post as more of a public service announcement to ease tensions in crowded lineups, or “how to be a beginner that everyone respects.”  This is also in addition to the basic rules of etiquette that I’ve posted here.  Read it.  Learn it.

So let’s get down to business, shall we?

1.) Don’t Paddle Out To The Main Peak

The main peak in most lineups is where the primo waves are breaking.  Sure, nobody owns the ocean, but it’s the unwritten rule that beginners should not paddle out to the main peak.  Think of it this way: would you waltz onto a street basketball court in the middle of a game and start trying to practice freethrows?  Beginners often don’t have control over their equipment, and this can lead to dangerous situations with boards flying everywhere and fiberglass crunching and blood and carnage, etc.  If you’re just starting out you don’t need the best breaking wave as you probably can’t take full advantage of them anyway.  Paddle out and surf down the beach out of the way; you’ll get more waves and you will have all the room you want to lose your board or get caught inside.

I’ve had several waves ruined by folks who were sitting directly in my line, staring at me and not moving.  Key word: sitting.  OK, Sometimes poop happens and you happen to get in someones way while paddling back out.  Sometimes I get caught in the Bermuda triangle and I can’t get behind them and can’t get over the wave in front of them.  But I try very hard not to let that happen.  That’s not what I’m talking about here.  What I’m talking about is folks who just sit there.  If someone is either paddling right at you to get a wave or is surfing down the line at you, you really should be doing your best to get out of their way.

3a.) Don’t Throw Your Board

This one is self explanatory.  Just don’t do it!  Learn to turtle roll or duckdive.  At least try to have some semblance of holding on before you let go.  Too many folks out there think they can just chuck their board and swim under the wave.  I was almost nailed by someone who did this a few weeks ago.  That’s not what your leash is for!

3b.) Don’t Kick Your Board Out

There’s something to be said for wiping out or getting knocked by the wave.  Sometimes you can’t help it.  But don’t intentionally just kick your board out and jump off when you’re done with the wave.  I see lots of folks ride a wave, and then just hop off and let their board rocket towards the beach at 90 miles an hour as they take a relaxing dip in the whitewater.  This is quite dangerous for those paddling back out.  Remember, if you’re on a longboard and your leash is 8 or 9 feet long, that’s a potential 18 foot radius of destruction.  I know several people, including myself, that have had very close calls or have been hit in the head by someone who kicked their board out.  Try to hold onto your board.  Reach out and catch the rail when the wave is over.  Stomp hard on the tail and the whitewater will pass over you.  Surf like you don’t have a leash.  This is just good surfing practice, not to mention it looks way better and more professional. You might think it’s hard at first, but you don’t know what you can do until you try.

If you see someone out enjoying some waves all by their lonesome and you want in on the action, it’s pretty rude to paddle right up to them and plant yourself 5 feet away.  I’ve gotta say, for most surfers this is akin to just blatantly cutting in front at the supermarket line.  This happened to a friend and I the other day.  We were trading waves on an empty sandbar, and out paddles a dude who sits right on top of us and proceeds to drop in on us.  This is a major faux pas, dear readers.  It’s probably one of the rudest things you can do in surfing.  There are most likely some other peaks around, so try for that.  If it’s the only peak in the area then paddle out, sit off to the side a bit, and wait your turn.

5.) Spread Out In The Lineup

Ok, some lineups are just a big chaotic mosh pit.  However, most of the time at beachbreaks you can spread yourselves out.  If someone’s sitting and waiting for a wave, don’t paddle and sit directly in front of or behind them.  Sit off to the side a bit.

This is self explanatory.  But everyone should know how to swim in the ocean.  It makes me a little nervous when friends tell me they can’t really swim too well, but it’s OK because they have a leash or they’re “attached to a lifesaving device.”  No!!  This is not the case.  I say this all the time but leashes can break, so you really can’t rely on it.  Ensure you can swim back if you need to.

And put your fins in the right way. 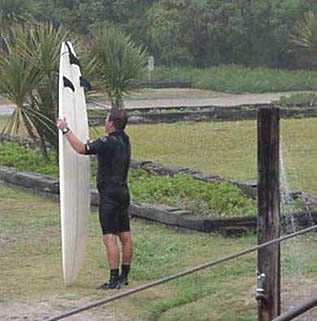 So now that you know how not to be a donkey, go out there and have fun.  Surfing is great, and I don’t want to discourage anyone from giving it a go.  It’s going to take you some time to get good, but the rewards are absolutely worth it!  You’ll make lifelong friends and lead a happier, healthier life.  Now get out there! 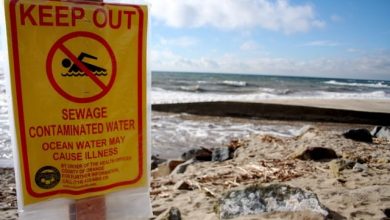 Surfing After It Rains: Good Idea Or Not? 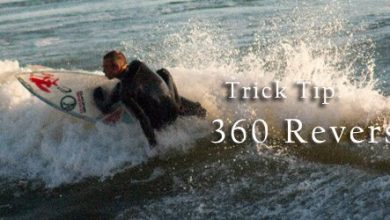 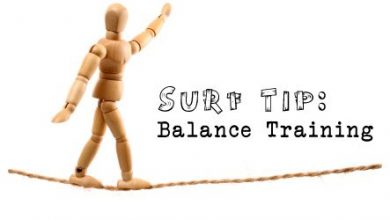 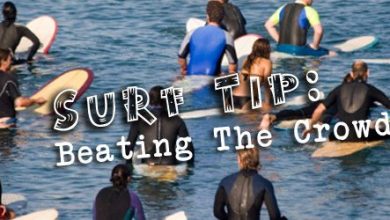